A new exhibition at the city palace museum in Udaipur explores the portraits of the Maharajas and their families taken by their personal photographers, but only a few people know that the same kind of photographers, although a dying breed, are still around in India using more or less the same techniques as in the 19th and beginning of the 20th century.

Not so long ago, street photographers using big old wooden cameras where a common sight in India. In Jaipur, right next to the wall of the Palace of Winds (Hawa Mahal) there used to be at least ten photographers only a few years back but now there is only one left. The rest must have found some other way to make a living now that everyone has a digital camera, and only an occasional tourist would sometime be interested in these old style pictures as a memento of India. 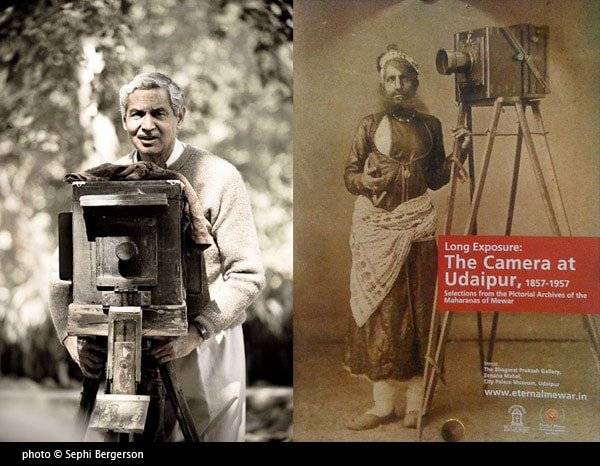 A few weeks ago, when my friend Philippe Lopez was visiting Delhi, we went looking for the photographer from whom I had bought such a camera a couple of years ago, only to find that his shop was gone and that he had mysteriously disappeared one day never to be seen again! I don’t even know his name. I do however have his old camera and a wonderful collection of some wonderful b&w basic cut-and-paste collage images.

Another photographer, Bharat Bhushan Mahajan, could very well be the last such photographer in Delhi. His ‘shop’ is in the park behind Birla Mandir in New Delhi. He has been using the same wooden camera and the same backdrop since 1949. The camera shows obvious signs of wear and tear and when we came for the session that was arranged two days in advance, he needed to first fix the camera using a hammer and some glue. this took about an hour. The price of a finished black and white photo here used to be 30 rupees (US$0.60) for 3 pictures but there are no customers these days for this style of photography. He took the camera out especially for us. Mahajan learned his trade as a young man from his father who was master photographer in what is today Pakistan, and it is indeed a remarkable trade

How does this camera work?

Alec McHoul describes the process very well in the wonderful article about Street and Studio: Popular Commercial Photography in India and Bangaladesh where he explores the exact same technique and compares it to the Calotype, one of the earliest photographic processes known.

The camera he uses, he writes, probably stems from the turn of the century or even earlier and operates in an intriguing way. Mahajan loads the camera with negative paper (Kodak commercial photographic paper) and then exposes the paper by taking off the lens cap (there’s no shutter) and counts to guess the exposure time – 2 to 3 seconds in daylight and 15 to 20 seconds in subdued light. During the exposure of the paper, the client must stay utterly still and not blink or change facial expression or else the picture will be blurred. To end the exposure, he replaces the lens cap. To develop the print, he uses the back of the camera itself as a kind of darkroom. Inside there is a tray containing homemade developing fluid. He pulls the paper out from behind the lens and dips it in the developer while looking at it through a red glass panel (which prevents white light from reaching the negative paper). Once it is sufficiently developed, the paper is removed from the camera and dipped in a fixative tray (held underneath the camera) for a few seconds; then he washes the paper negative in a bucket of clean fresh water. He dries it as much as he can and then mounts the negative print on the frame visible in front of the camera lens and re-exposes the print for 10 to 15 seconds, again depending on the light conditions. Because he is re-photographing the original negative on to a further sheet of negative paper, he ends up with a positive print which he develops in the same way (back through the two solutions in the rear of the camera, washed in water and dried). It is then ready for the customer to take away. The whole process is while-you-wait – about 20 minutes from start to finish, no film, no plate. 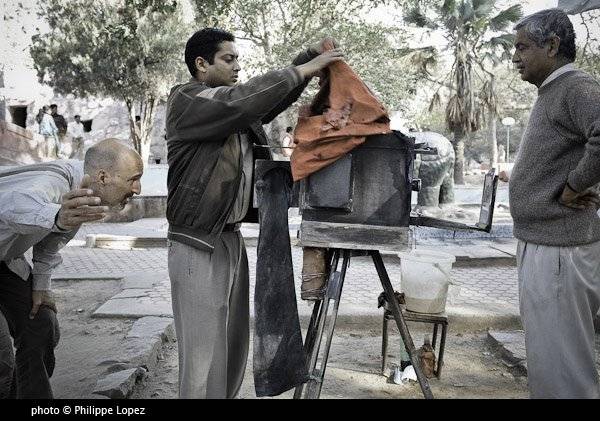 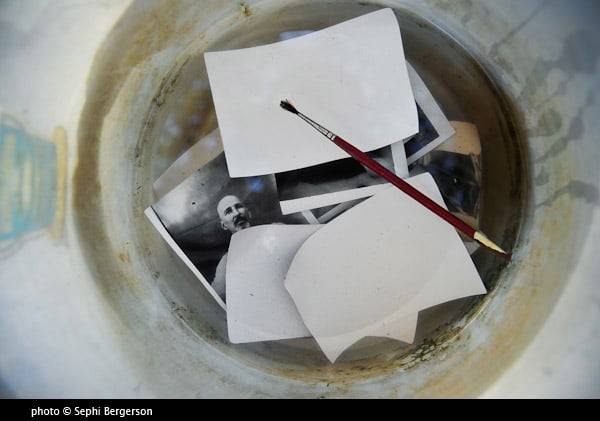 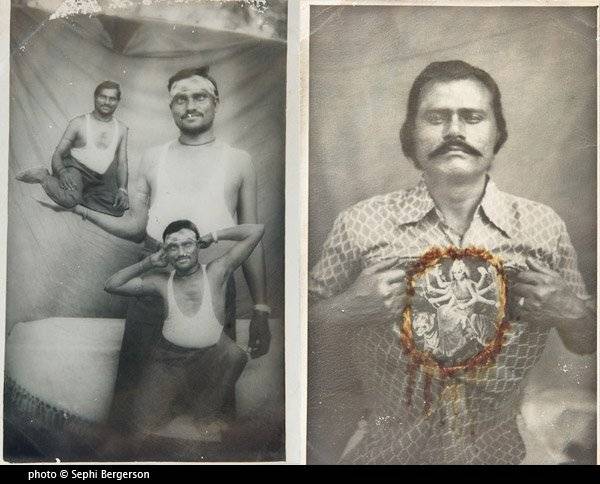 A couple of samples form my collection. unknown photographer.