It was said by a photographer (and thanks for John Stanmeyer for reminding) that showing contact sheets is like showing someone your underwear. An interesting way to put it but surely there is a great interest in the contact sheet that shows the  photographer’s thinking process behind the shot.

I was in Mumbai this weekend for the Ganesh Chaturthi seminar workshop. I didn’t really shoot much this time and tried to pay more attention to the workshop participants. When I shoot I actually live in a sparate world and see everything through the viewfinder. Having a group of people with me really made it impossible for me to focus on my own process. It is this process that I want to talk about. I had shown the following sequence of images at the seminar but I feel that it is a good reminder for the participants, and a good thing to share with others as well. Many people shoot single images and do not go beyond that. It is said that Isaac Newton got the idea of gravity when he was hit on the head with an apple while sitting under an apple tree. It is not necessary to sit under trees and wait for an apple to fall – we can get up and shake the tree. We can produce our own chance events. 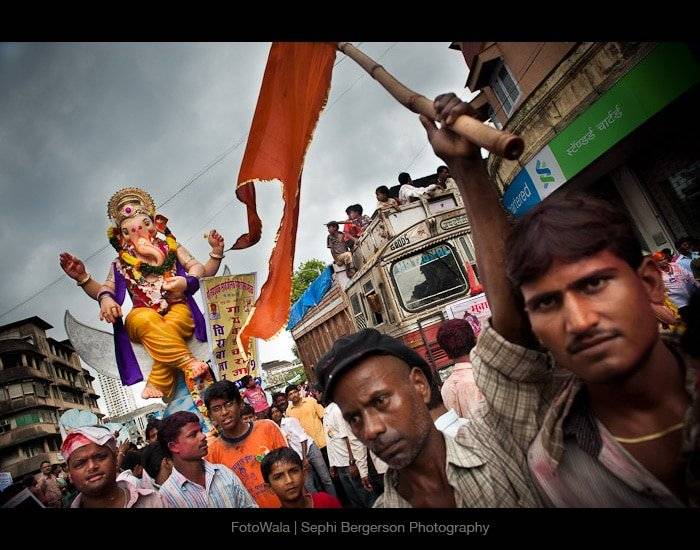 You must climb the tree or at least shake it

The reason I’m showing this sequence is to emphasize the fact that good images don’t just fall off the tree. Many times it is not enough to just point your camera at a subject and come out with a great image. It is a process, and I have many like these, where I saw a potential for a good image and had to start moving around it, explore it and dig in until it presented itself the way I was hoping it would. I notice, especially with young and inexperienced photographers, that this process is not a part of the way they work. Shooting a lot is the way to go.

I was in Mumbai for Ganesh Chaturthi in 2009 to shoot for my book ‘Horn Please’ on trucks and trucking in India. I saw the orange flag and knew this could be a strong element in the picture and started moving around it so that I could capture all the desired elements in one picture. I wanted the flag, the idol and the truck to be close enough. It did not happen until the ninth shot out of ten that I got what i wanted. In the selected image the hand that holds the flag creates a frame inside the frame for the approaching truck, the flag looks good and so does the idol which gives me the sense of location. I took another picture after that but I already knew that I got what I wanted.

Here is the sequence of shots that lead to the final one (above) which is number 9 out of 10. (Click on the image to move on to the next one)

Behind every great photographer stands a great retoucher

There was another saying that I recently heard again around the talk on James Nachtwey’s post processed images of 9/11 , that behind every great photographer stands a great retoucher. Not everyone is aware of the role post-production plays in some photographer’s style, and not everyone is able to easily spot and identity such retouching. This example could start a debate about what is allowed and what is not allowed in documentary photography so let me just tell you right away that I do not intend to get into this debate. I am not a news photographer and the way I see it is that if it can be done in lightroom than as far as I’m concerned it is allowed. Introducing flash in a dark situation is also interfering with the ‘truth’ of a photograph, whatever this might be. Let’s leave it at that.

I am showing the before and after post production so that young photographers would understand that post production is an inseparable part of the work in today’s photography. Most of what we shoot is crap and many times the selected images are ‘cooked’ and dressed to look good. It is not the only way to work of course but cards on the table,  many times it is the way that things are done. So go out there, shoot a lot and come back home to make a selection. Make yourself a cup of coffee or open a cold beer and start learning post production.