This is a follow up on the previous post on How, and do we represent the interests of those we photograph. There is a debate going on some facebok groups as well as on my page about how proper it is or isn’t to conduct a documentary photography workshop in Dharavi. Some people feel it is wrong from a moral point of view of possible exploitation of the residents of Dharavi. I disagree and have already written the above post last week, but there is still a lot to be said. What makes me happy is that if for no other reason, the idea of the workshop in Dharavi is already paying off even if only for the conversation.

A couple of years ago I took my then ten years old daughter Liah on a trip to Ladakh. There was one particular image of a unique short encounter with a nomad woman that I took near the high altitude lake of Tsomoriri. A very simple and straight forward iPhone image, but one that made me think about the essence of being a travel photographer and about how much we impact the places we visit even by simply passing through and seemingly not making a difference.

Back in the car after talking the picture I had a look at it to do some in-camera editing and it somehow, very humbly, reminded me of the kind of images I used to see from the photographers of the American depression, a Dorothea Lang kind of feeling. I am not comparing my iPhone picture to a Dorothea Lang image in any way, but maybe it is the shabby cloths and the dirty face, the hands that used to be such a visible subject in her work. More than anything else it was the gaze, the eyes looking away and out of the frame to an unknown direction that made me think. 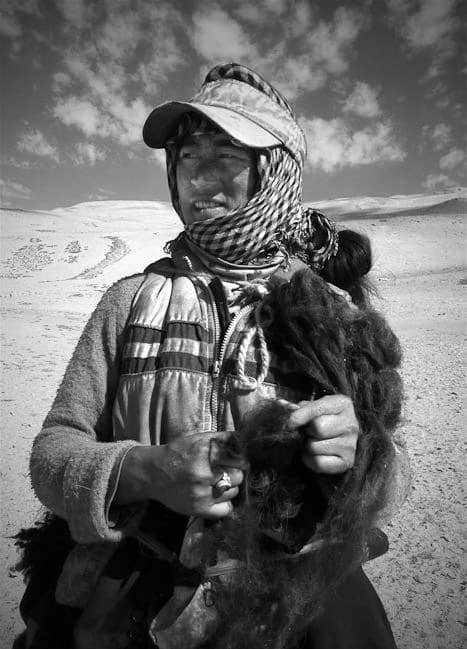 There is of course a world of difference between the two images. The farmer in Lang’s picture has no hope at all and his gaze is the one of a person waiting for good news knowing it is not coming. Squatting in the dirt wearing his battered hat, his hands as still as the rock in front of him and his face as wrinkled as his shirt and creased as the dry land behind him, he is, in a way, the face of the depression.

The nomad woman shows something else all together. Her hands are busy with something that looks like the wool of one of the yaks in her herd, the ring on her finger emphasizes the strength in her useful hands. Her hat is nothing like the one of the farmer above but on top of all of that, her eyes are not sad. It seems she looks away with a certain amount of content and optimism and is even smiling. But what makes her smile? What is she really doing with her hands?

I was back in the car thinking of what residue this encounter had left in the woman’s mind. I know there was nothing in the horizon or beyond my shoulder that was grabbing her attention but she looked away. the distant lake was indeed beautiful but I would have to assume that the little smile is more likely a smile of embarrassment, of being camera shy, or of not really being sure what to think of the whole situation. The hands probably reflect her nervousness.

The challenges of a travel photographer

One of the pleasures of travel has always been to dive into new places where others are compelled to live and being able to come out unharmed to tell the stories of how great the trip was. Knowing that we have abandoned the subject of our gaze to their fate, we like to think that their lives are full of a local happiness and a quiet resignation that we no longer experience in our modern way of life.

But what is the residue that we leave behind after our short visit? The fact that someone is passing through suddenly forces the comparison between the nomad life (in the above picture) and the passing traveler’s life, making the one who stays behind suddenly conscious of her fate so that her quiet resignation is now possibly disturbed by the thought of the possibility – that might never be acted upon – of moving on. Her mind might go beyond the horizon and the lake and wander to far away places that she’s never seen. A seed of unhappiness might be planted that will slowly change her world and disturb her resignation. We are making a difference simply by passing through. It is an accumulative process that will eventually erase the nomad’s culture. She is already wearing a modern vest and her cap is surely not a traditional Ladakhi head cover.

We move about with our slick cameras and expensive gear and if we are not careful we might crush the fabric of cultures that we come in touch with. Sometime more and sometime less but we do make a difference and we leave a residue as we pass by. I would love to hear your thoughts in the comment thread below.