I have always believed that every photographer should at all times be engaged in a long-term personal project. I am so committed to this idea that it would not be an exaggeration to say that my main work is personal and the assignments are there to enable me to keep working on these personal projects.

About a year after coming to live in India, on a warm and sunny September day in 2003, I was with my wife and daughter at a place called Birla Mandir in New Delhi where I came across a photo studio, actually not more than a twelve feet square, owned by a photographer the likes of which I saw before only as street photographers at tourists spots like Jaipur’s Hawa Mahal or Pushkar. The photographer was using a big old wood camera to take amazing vintage looking portraits on black and white paper. We had our picture taken for thirty rupee but I knew this could not be the end of it. (Read more about this photographer and A few years later I visited him again and he was not using the camera anymore. “No one is interested in these pictures anymore so I use a digital camera now” he said. We had some chai and talked about his life and I ended up buying the old camera from him, along with sixty of his original pictures. I did not catch his name then and when I came to visit again the shop was not there anymore. His neighbor told me that he had disappeared one day on his way home and was never seen again. I kept the camera for a few years as I knew I would end up doing something with it but it was only years after buying it that I started using it for a new photographic project I call The Fatafat, after the name of this quick style of photography **.

It is hard to imagine that up until very recently, and to some extent even today in some isolated locations across the country, this photographic technique that is almost identical to the very first photographic process, the Calotype, is still in use in India on a regular basis by working street photographers. The Fatafat project is a series of portraits of the new generation of Indians that live in Delhi in this special time of change in India. A generation that belongs to the digital age and the days of the internet. The portraits are shot using the old camera form 1949 in the same technique used for generations by street photographers in India. The final book will combine some of the street photographer’s original images and a chapter about street photography in India, which forty new portraits that I am now shooting with a chapter about the change that this generation is a part of. Every portrait will have a few lines of text describing the person in the picture; who he/she is, their age, their home town and how they came to Delhi, what they do in life etc.

Here is a sample of a few portraits from this project. If you are an Indian with an interesting story/look/attitude or if you know someone (in Delhi) that you feel represents a changing generation and want/willing to be a part of this project than I would love to hear from you. 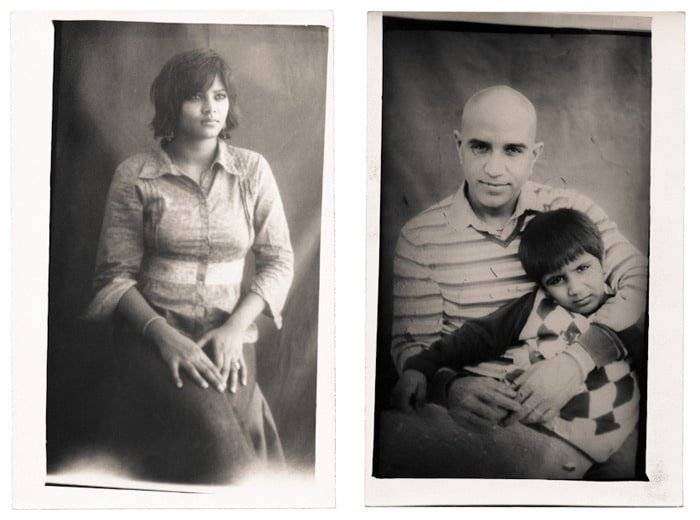 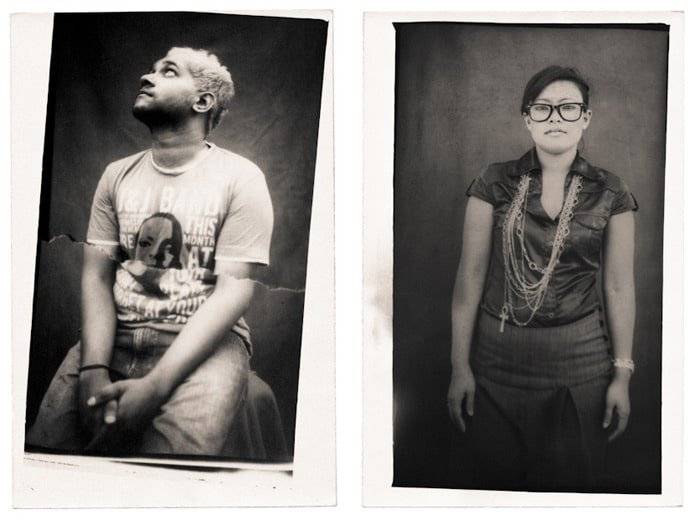 How Does this camera work? *

The camera used probably stems from the turn of the century or even earlier and operates in an intriguing way. It remains a fixed distance from the object (about 6ft). The photographer loads the camera with negative paper (preferably fiber based for a better result of the negative). There’s no shutter so he exposes the paper by taking off the lens cap and count to guess the exposure time – 2 to 3 seconds in daylight and 15 to 20 seconds in subdued light. During the exposure of the paper, the client must stay utterly still and not blink or change facial expression or else a blur will result. To end the exposure, the photographer replaces the lens cap. To develop the print, he uses the back of the camera itself as a kind of darkroom. Inside there is a tray containing homemade developing fluid. He pulls the paper out from behind the lens and dips it in the developer while looking at it through a red glass panel (which prevents white light from reaching the negative paper). Once it is sufficiently developed, he removes it from the camera and dips it in a fixative tray (held underneath the camera) for a few seconds; then he washes the paper negative in a bucket of clean fresh water. He dries this as much as he can and then mounts the negative print on the frame that can be attached in front of the camera lens and re-exposes the print for 10 to 15 seconds, again depending on the light conditions. Because he is re-photographing the original negative on to a further sheet of negative paper, he ends up with a positive print which he develops in the same way (back through the two solutions in the rear of the camera, washed in water and dried). It is then ready for the customer to take away. The whole process is while-you-wait – about 20 minutes from start to finish, no film, no plate.
In the standard manuals and histories of photography, there is no clear exposition of this unique and incredibly economical process. To guess at the nature of the invention: it appears that the early street photographers managed to hybridise two 19th century technologies: the calotype camera and the portable darkroom into a single apparatus. Perhaps because of the sheer problems of having to carry the whole apparatus and having to present the client with a finished paper print quickly, they by-passed the luxuries of both plate and film photography and the Fox Talbot calotype itself (which all require separate development locales). How they arrived at this remarkable hybrid – a kind of Polaroid avant la lettre – is unknown. It is documented, however, that unique local variations on the calotype were being used in India before 1853, and presumably, therefore, within a decade of Fox Talbot’s announcement of the process.
Clearly then, this photographer’s method is a form of calotype, the process first announced by William Henry Fox Talbot to the Royal Society on 31st January 1839 (six months prior to the publication of Daguerre’s plate method), therefore one of the earliest photographic processes known, and the only known method of using light-sensitive paper in the camera itself. There are however several differences between Fox Talbot’s original procedure and those of the traditional Indian street photographers, though the differences are minimal. Fox Talbot prepared his own paper, while the street photographers use modern photographic paper. In the original calotype process, the negative image was taken from the camera, developed, pressed against photo-sensitive paper and exposed to sunlight to achieve the positive image. By contrast, the street photographers actually re-photograph the negative to get a positive. This suggests that the Indian street situation is probably unique. It’s a variation on the calotype and identical with it until the point of negative-positive conversion. The calotype involved a darkroom process, outside the camera – whereas the Indian process involves developing the negative inside the camera, re-photographing, and then re-developing the new positive (also inside the camera itself).

** More images of the camera and the process on my previous posts “Maharaja portrait photography in 21st century India“, “Working with an old wood camera” and “Portrait Photography in a Daylight Studio”