Is the NGO distributing micro loans to women in Chhatisgarh actually a front to a new Christian mission in disguise? I have just returned from Raipur, Chhatisgarh, shooting a feature about microfinancing for a German consumer magazine. The shoot was very simple and straight forward, but we have found some remarkable facts about the NGO that distributes the loans.

So the story goes like this; a German company (let’s not mention names here) wants to improve their reputation and decides to spend some money in India to help the poor. They check and find a legitimate NGO that works in the field of microfinancing and contact them. The loans are very small in European standards, but are exactly what people in Raipur need, so all looks well.

The NGO appoints CROs (Client relationship officers) that go to the slums and form groups of women who already have a small business but need some help to grow. The loans will be given to carefully selected women that will be responsible for the other women in the group as well, thus ensuring that the loan will be paid back.

The initial loan given is of Rs 5,000 (€ 72) and the weekly return on this loans is Rs 224 (€ 3.2). This is enough to enable women like Devo Bhagel (48) to grow her small scale business, selling Gupchup, a famous street food savory delicacy, on the streets of Raipur. 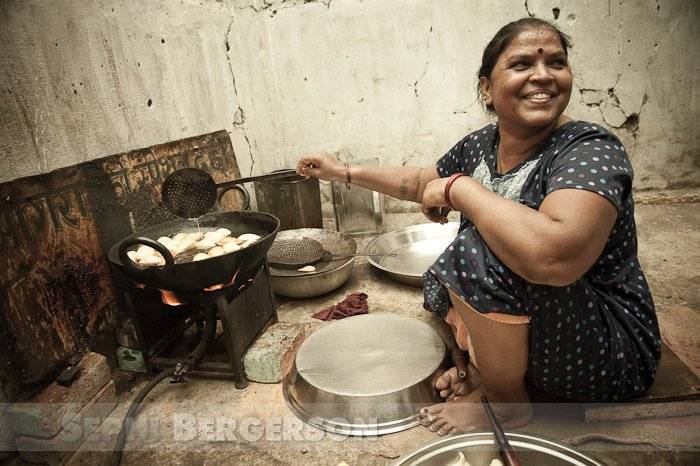 Devo Baghel (48) at home, preparing Gupchup, a savory street food snack, that she sells every night on the streets of Raipur. 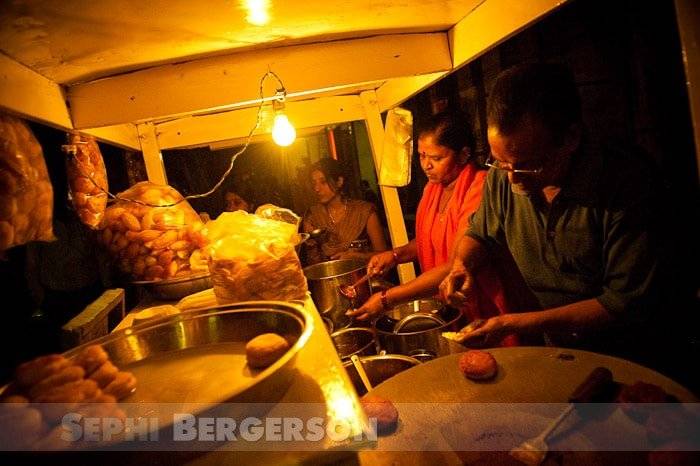 Devo Baghel (48) and her husband work together at her Gupchup cart on the street of Raipur, Chhatisgarh.

So far so good. Once the initial loan is returned, Devo will be able to apply for another loan of up to Rs 25,000. She already has two helpers and it seems that her business is going in the right direction. So, what else you must be asking? well, this is what happened.
We (myself and a journalist) arrived in Raipur on Sunday night and checked into our hotel, where we also met the NGO coordinator, Vinney Vani. He was a very pleasant man, and obviously very eager to help. We explained what we were looking for and he said he will help locate a woman that could be a good example for the project. “We cannot just go anywhere looking for people” he said, “as people might think we are trying to convert them” (!). Now what would Sigmund Freud have to say about that? I could feel my left eyebrow raised.  Anyway, before we parted, he suggested that we join him and the other office staff at their office in the morning for “Devotion”. “it is a half-hour program” he said, ” we pray and sing for the Lord”. I was not very excited, but could not really refuse.

Vinney Vani from Growing Opportunities (India) Pvt. Ltd. at Devo Baghel’s home in Raipur, Chhatisgarh. “My wife is originally from a Hindu Brahmin family, but she had found the Lord”

The morning program was a bit embarrassing. We were seated in front of the twenty or so workers and were garlanded with flowers. Prayer and devotional christian singing followed. As it turns out, Growing Opportunity (India) Pvt. Ltd., a legitimate and reputed organization with a head office in Chennai, seem to be a very religious Christian organization spread all over the country.

I would not want to jump to conclusions here, but a quick internet search brought up a story on the NYTimes Christian-run companies increasing in almost every corner of the globe. NY Times: Their Mission: Spreading the Word Through Business (click to read). An interesting read!

Innocent? incidental? only good people trying to help? I leave it up to you to judge, but it does look a little suspicious.

* Microfinance is the provision of financial services to low-income clients, including consumers and the self-employed, who traditionally lack access to banking and related services.